Is a Short Sale the Answer for Lenny Dykstra? 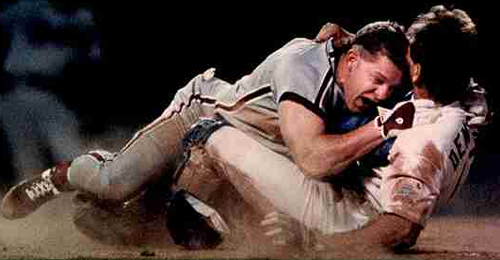 CNBC reporter, Jane Wells sat down with “Nails” this week at his Sherwood Country Club estate to discuss his recent Chapter 11 bankruptcy filing.  Lenny bought the estate two years ago from “The Great One”, Mr. Wayne Gretzky, with a loan financed by Washington Mutual.

Lenny is not alone in this situation, as many good people got caught on the wrong side of the market when they bought at the height of the bubble.  But when you strap a $17.5 million loan on to your back at the top of the housing bubble, sooner or later you are “gonna need a bigger boat”, as Chief Brody says.

In addition to horribly timing the market on his home purchase, Dykstra is claiming Washington Mutual defrauded him on the mortgage:

He says when he bought Wayne Gretzky’s estate two years ago, a broker from Washington Mutual promised him a single $17.5 million loan, but delivered only $12.5 million.
Dykstra says he was urged to go get a second $8 million mortgage, to complete the $17.5 million and allow him to have some extra cash, as the house, Dykstra says, appraised for $25 million.
Dykstra says the broker promised he could refinance both mortgages into one affordable payment after 60 days. But the baseball legend claims the mortgage broker disappeared.
There was no re-fi.
Meantime, he was paying close to $200,000 a month in mortgages, and his income was only $125,000, that money coming from a promissory note he received after selling his car wash business. Unable to continue paying more than he was making, Dykstra says he was forced to sell the promissory note back to the owners of the car wash to pay off the second mortgage. That erased his nest egg, he says.
Dykstra refused to talk about Index Investors, which, as we reported yesterday, is the company actually moving to foreclose on his mansion, saying Dykstra owes $910,000.  Dykstra is suing Index and its owner, Jeff Smith, for violating state usury laws, among other claims.

As was typical on these super jumbo loans at the time, the loan was split up into two loans:  The first loan would typically be sold off to an investor that was comfortable with the investment up to a certain loan to value ratio.  The second loan, or line of credit may have been done by the lender on the first loan or by another party.

Though many people will look at this situation and think that Lenny is grasping at straws in claiming mortgage fraud, I would not make that assumption immediately.  Back in the go-go days of stated income stated asset (SISA) loans, I would constantly hear stories from clients about the irresponsible verbal assurances some loan officers at these blue chip firms were making, just so they could close the deal and make the commission.

In this situation, I would give Lenny the benefit of the doubt for this reason:  These banks were spending hundreds of millions of dollars on building brands that stood for trust and integrity.  While they were spending record amounts on advertising, they were making so much money on loans that they had to recruit more and more loan officers to service the demand.  Cubes were at full capacity.  Suffice it to say that shady loan officers were not just working for small independent brokers back in 2006 and 2007.

If the lawsuit doesn’t work out for Lenny, completing a short sale – which has what appears to be three separate liens – would be like hitting a lead off home run in the World Series at Fenway Park (Lenny did this while playing for the Mets in the 1986 World Series against the Red Sox).  I wouldn’t give up on “Nails” just yet.